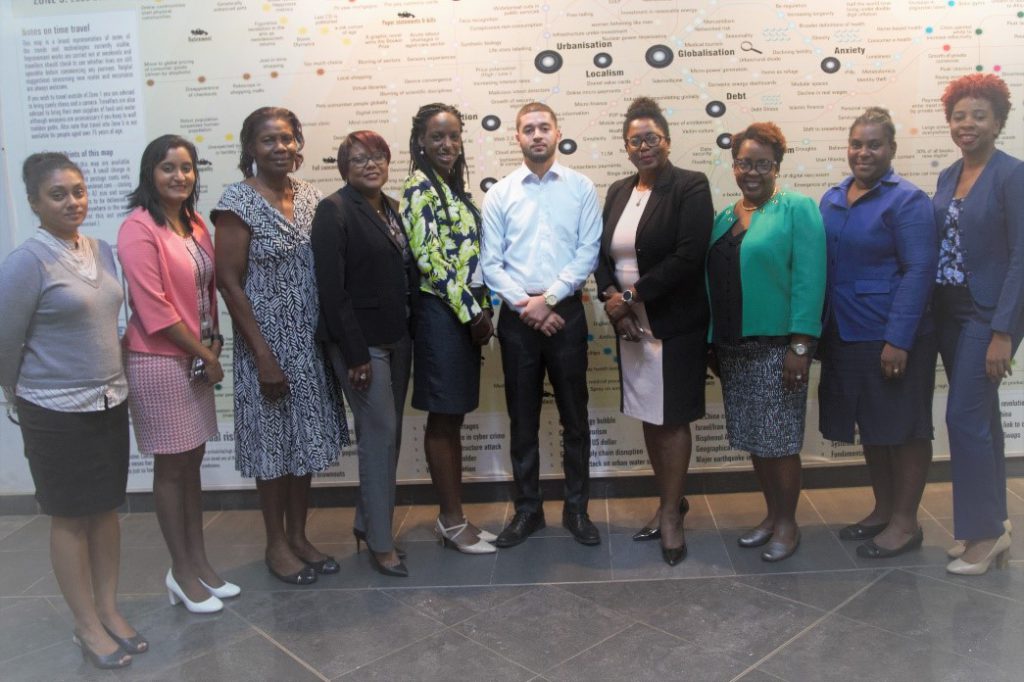 Nine UWI-ALJGSB participants will be attending the Society for Human Resource Management (SHRM) 2019 conference and exposition in Las Vegas, Nevada, USA from June 23rd – 26th 2019. The student delegation, led by Dr. Wynette Harewood, will join over 20,000 attendees at the Las Vegas Convention Center for the largest annual Human Resource Management conference and exposition in the world!

This year, the theme of the conference is ‘Creating Better Workplaces’. HR practitioners perform several roles at the intersection of people and business that present unique challenges and opportunities for creating better work environments. With almost 200 concurrent sessions to select from, delegates will have the privilege to attend presentations addressing strategies and practical takeaways relevant to the conference theme. These sessions, conducted by internationally renowned Business and Human Resources experts, will cover nine broad topic areas:

The conference and exposition provide a rich and diverse learning environment to broaden knowledge about HR strategies, tactics, products and services. As the largest gathering of HR professionals, it is an ideal meeting place for networking with Caribbean and international HR practitioners, researchers and educators.

View photos from our delegation that attended the 2018 SHRM Conference and Exhibition below!

Is Your Money Safe?

By salome belasco | Blog | No Comments

Do you evaluate the riskiness of your financial institution or do you simply invest based on the power of the brand? I strongly suspect that it is not based on risk assessment but on some other factors. How does the financial institution now treat with such blind faith? It is beyond the scope of this article to cover every aspect of this topic but rather to give the reader an insight into what they may be exposed to by the financial system.

All financial institutions are well aware of the term risk management. They have it all carefully worked out. The Asset Liability Management Committee meets regularly to ensure that everything is maintained within parameters and all should be well.  There is actually more to it than meets the eye. All financial institutions are exposed to a number of risks which they should carefully consider and evaluate on a regular basis.

The international banking sector has adopted sophisticated risk management systems to manage the relationship between risk, return and capital with a view towards maximizing returns within the established risk management framework.

Despite these risk management frameworks ranging from the Basel Accords, local laws and regulations and individual bank requirements, there has been no standard risk-taking behavior adopted by all financial institutions. All other factors being equal in terms of economic conditions and environmental conditions, there have been significant influences on the risk-taking behavior of financial institutions leading to differences in their performances.

During the 2008 financial crisis, there were more than 400 bank failures in the United States.  This had a major effect on the economy of the United States as well as a damaging ripple effect around the world due to the interconnectedness of the global financial system.

According to Ben Bernake, The failure to appreciate risk exposures at the firm-wide level can be costly. Example during the 2008 financial crisis, firms did not fully comprehend the extent of their exposure to US subprime mortgages. They did not recognize that in addition to the subprime mortgages on their books they were also exposed to these mortgages via off balance sheet vehicles.

In Trinidad and Tobago, investors in Clico Investment Bank faced a similar situation of being exposed to the risk of which they may not have been aware at the time of investment.

Due to the interconnectivity of the financial system financial institutions are being encouraged to consider not just their direct customers and shareholders but to adopt the bigger view of the stakeholders. A stakeholder in this instance is the wider society. Why is this so important?

The “too big to fail” theory adopted by financial institutions means that they have effectively transferred their risk to the stakeholder. This means as in the case of the US subprime fiasco and locally Clico and Hindu Credit Union, the taxpayers were forced to bail out the institutions to avoid economic collapse. Stakeholders (taxpayers) were exposed to risk without any agreement on their part.  This risk transference is indeed very worrying as the extent of the risk only becomes apparent after a crisis.

How Much Risk is Enough?

But what does risk management mean? The technocrat will probably answer that risk should be kept within defined standards and this could be verified by audits (internal and external). But more importantly, it will also be verified by external credit rating agencies.  Your financial institution is probably rated AAA. What does that really mean? Does that rating mean anything to you? Well first of all who exactly are you? Are you a depositor, shareholder or stakeholder? How does your financial institution measure up?

In terms of risk-taking behavior, the banking sector in Trinidad and Tobago has been very conservative in their lending as evidenced by an average delinquency rate of 4% which is 1 % lower than the industry benchmark.  This can be interpreted as the banking sector in Trinidad and Tobago is not taking enough risk as their profit margins are largely dependent on the spread and service fees.

This may be viewed as the banks not lending to projects with positive NPVs. The high profitability of the banking sector without them taking enough risk may be enough to appease shareholders but stakeholders remain dissatisfied by the overly conservative nature. What is the purpose of the bank? Banks may intentionally not take the risk even with projects with a positive NPV to maintain their credit ratings. Apart from profits, banks are supposed to play a developmental role in society.

But good governance is not about not taking a risk, but rather taking the right amount of risk according to the stakeholder’s risk appetite. This implies that stakeholders should be aware of the potential risk and rewards and make an informed decision. This, of course, is where the Board should be concerned in providing the right oversight and make decisions based on correct and current information.

The Role of the Regulator

The important lesson learned from previous financial crises is that you cannot place full trust in regulators. After every crisis, new rules and regulations are instituted with an aim of plugging the previous loopholes, but these deal with specificities rather than the entire system as a whole, which is not an easy task by the way.  The truth is that the rate of innovation in business and banking is beyond the capacity of the regulators to be proactive. There must be some type of governance mechanism to deal with this issue.

The fact of the matter is that financial Institutions and indeed any business cannot succeed without taking a risk. The classic financial theory also highlights the theory of risk and reward going hand in hand. But there is information asymmetry, so stakeholders are at a disadvantage and hence decision making is skewed. It is therefore that stakeholders carefully monitor the health not just of their financial institution, but the financial system as a whole because they may be faced with the risk that they had no idea was transferred to them. What do you think? Are you comfortable now? 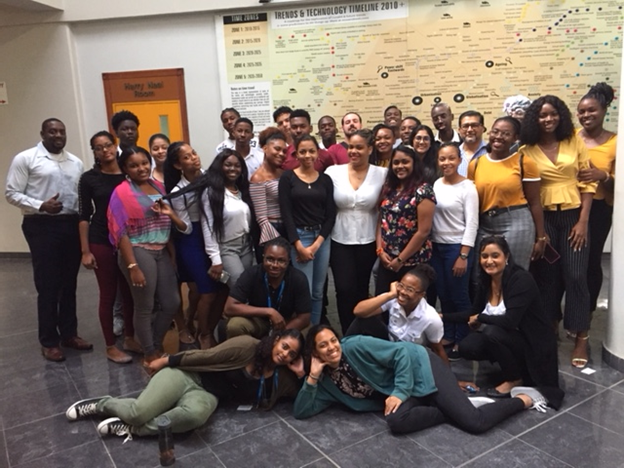 French Guianese students from the from the École de Gestion et de Commerce de Guyane, visited the Lok Jack GSB North Campus for a study tour as part of their summer session, from 27 – 29 May. This initiative was spearheaded by the Institutional and International Relations Centre (IIRC), and included the participation and support of our Bachelor of International and Sustainable Business students and coordinators. Students also engaged in numerous workshops such as design thinking, which highlighted the transition from inspiration and ideation towards implementation. Our facilitators exposed them to tools and techniques such as visualization, mapping, and using storytelling to create solutions. They also engaged in testing, refining, and improving new ideas, business models, and processes. To wrap up the sessions, students who developed a business idea had the opportunity to present it to a panel of entrepreneurs. Students from French Guiana and the Lok Jack GSB Bachelor of International and Sustainable Business (T&T) programme, mingling in front of the “Future of Trends Map” at the Atrium of the Lok Jack GSB campus.

Students Exchange and Study Tours are initiatives and services offered by the UWI-Lok Jack GSB through the Institutional and International Relations Centre (IIRC). For more information about student exchanges or study trips, please contact the IIRC at (868) 645-6700 ext. 139 or email: iirc@lokjackgsb.edu.tt.

To learn more about the Bachelor of International and Sustainable Business programme, please contact the Admissions department at admissions@lokjackgsb.edu.tt or (868) 645-6700 ext. 200.